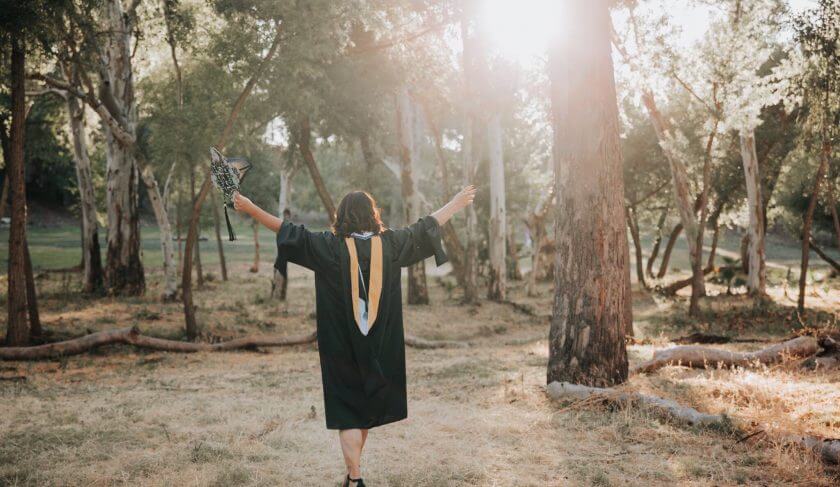 Paying off such a large amount of debt was no easy feat. It required sacrifice, discipline and lots of hard work. I cut my budget, and I side hustled to earn extra money at every waking moment.

Although those things helped me pay off debt, there’s one thing that truly changed everything: shifting my money mindset.

Putting it simply, your money mindset is the culmination of all your thoughts, beliefs, emotions and experiences with money.

Like many millennials, I just thought I’d be in debt forever. Everyone has student loans, right? If everyone has them, then it’s no big deal. I was told — and convinced — that student loans were “good debt.”

Did No Work to Pay Down Loans

Now, I realize how much these beliefs held me back from paying off debt. For the first five years of student loan repayment, I paid the minimum when I could have paid more. At the time, it never even occurred to me to put more toward my loans.

It wasn’t until I took on even more student loan debt to go to my dream school, New York University, that I realized I didn’t want to be in debt forever. Although I had paid money toward my undergraduate loans for five years before grad school, I graduated from NYU with $68,000 in student loans.

I was hopeful that my dream school would lead to my dream job and dream salary so that I could easily pay off all that debt. That didn’t happen. I graduated from NYU in May 2011 and tried to find a full-time job in New York City.

I was working part time and picking up gigs, but I knew that when my grace period ended, I would not be able to afford both my rent and my student loan payments.

Debt Ruled Over All Life Choices

In December 2011, I made the tough choice to leave New York City. I loved New York and didn’t want to leave, but I couldn’t make it work financially. I moved to Portland, Oregon for cheaper rent and to be with my partner.

Though I missed New York, I was happy to start fresh. But I still struggled in Portland to find enough work. That first year I made $10 to $12 per hour. This was not what I was expecting after getting a master’s degree. Sure, I majored in the arts, but I thought I’d be able to find rewarding, life-changing work at an arts organization.

Nearly a year and a half after my graduation from NYU, I was sick, tired, and depressed about my debt. All of my dreams were on hold, and I felt like debt dictated all of my life choices. I was fed up and didn’t want to keep going the same way I always had.

I knew I had to make a change but wasn’t sure how or what to do. Ultimately, I decided to start a blog called Dear Debt about breaking up with debt. I publicly declared that I would get out of debt in four years and decided to chronicle my debt repayment journey. At the time, I still had $57,000 left and was making $12 per hour.

Suddenly, I stopped being complacent about my debt and addressed it head on. I was no longer in denial about how much I owed. I wasn’t waiting for help from others. I realized this was something I had to do on my own.

To help with this mental shift, I got rid of the term “good debt.” I was certain this wasn’t it. Instead of rationalizing my debt because of my education, I started treating it like a crisis. On my blog, I began writing breakup letters to my debt and treating it like a person I was desperate to get rid of.

Once I realized my student loans were robbing me of my future, I began to make changes. I decided that there was no other option but to get out of debt, and I had to do it ASAP in order to truly be free.

How I Paid Off My Student Loan Debt

I went without health insurance (pre-Affordable Care Act), opted not to have a car, said no to cable and walked and biked everywhere in lieu of a gym membership. My half of the rent was $400, and my utilities were between $100 and $200. (My partner and I split everything down the middle, but he did not help me with my student loan payments.)

On top of that, I rarely went out to eat or to bars. Though I was in my late 20s, I acted like a broke college student. Once I cut back on everything I could, I hit a plateau that threatened to slow my momentum. I couldn’t cut anything else, so how was I going to pay more on my debt?

I knew I had to earn more.

I took on side gigs as a brand ambassador, pet sitter, mother’s helper and event assistant. I found gigs on Craigslist and TaskRabbit, as well as through referrals.

Working so many gigs helped me put several hundred dollars more toward debt each month. I focused on putting more toward my higher interest loans first (commonly known as the “debt avalanche” method) so that I could reduce how much I paid in interest.

Side hustling revolutionized my debt payoff process since I was a low earner at the time. But I knew I didn’t want to stop there, so I decided to diversify my side hustles.

After starting my blog, I realized people were leveraging their blogs to get freelance writing gigs. So I thought I’d give it a shot. I started off writing blog posts for others making $25 per post. In a matter of months, I got even better-paying clients, allowing me to put more toward debt.

And funny enough, as I started getting all these side gigs, I finally got a non-profit job as an event and communications coordinator that paid $30,000 per year. But after a year, I quit that job because I earned more with my side hustles — and I knew I could earn even more going out on my own.

That first year of self-employment, I was able to double my income. By doubling my income and keeping my expenses low, I wiped out all of my debt on Dec. 10, 2015 — a whole year ahead of schedule.

Fully Commit To Paying Off Your Loans

I did a lot of work to pay off my student loans, but I credit my mindset shift with getting me going. For so long, I was paralyzed and stuck. Once I realized I had to take student loans into my own hands, I fully committed to the process, dirty work and all.

When it comes to paying off debt, you’ve probably heard that you need to cut back and earn more. Those are tried-and-true strategies that work, but no one really tells you that your mindset must shift to accomplish something like paying off a large amount of debt.

Do you need to pay off debt or reach another important financial goal? It’s crucial to change your money mindset. Start by writing down some ideas or beliefs you have that may not be helping you. Then rewrite the sentence.

For example, I used to think, “I’ll never get out of student loan debt.” Then I shifted it to, “I am going to pay off my student loans in four years.” Actions follow thoughts, and I was able to pay off debt three years after declaring it on my blog.

Having a plan in place and getting in the right mindset can do wonders. These changes can be just what you need to go from being buried in debt to becoming debt free.

This Week In Your Wallet: Millennials, Purpose And The Price Of “Sucking It Up”