What My Divorce Cost Me 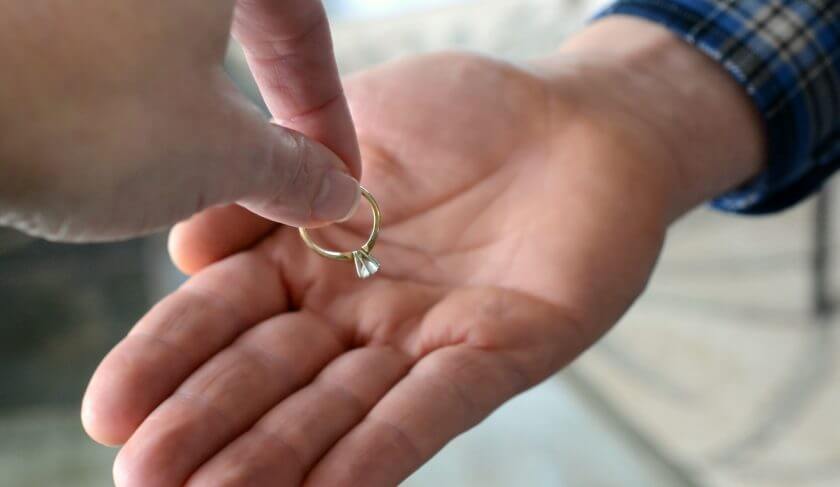 For starters, my divorce cost me my money and my dignity. I'm only now just beginning to emerge from the shadows. Learn how my story can help you.
Divorcing after 20 years of marriage left this 44-year-old mother of two financially devastated and almost homeless. Several years later, I’m emerging from the fog, but I made some embarrassing mistakes along the way.

Let’s go back to 1995. Although marriage and children were never my goals, 23-year-old me ended up making other plans. I became smitten with a man, and a whirlwind romance resulted in a pregnancy after seven months.

Marriage and baby No. 2 soon followed. My husband and I both worked full time, and my grandmother helped out with childcare because we were nervous about strangers watching our daughters.

Shortly after 9/11, it became clear that New York City living wasn’t what we wanted. So we moved north in search of a better life. We were steadily improving our lives and steadfast in our desire to beat the nearly 50 percent divorce rate.

Unfortunately, it wasn’t meant to be. To get to our jobs, we had to endure a 152-mile commute, which took a physical and financial toll on us both. Most of my income paid for day care, transportation and the smaller house bills. My husband paid the mortgage (sometimes on time) and spent hundreds each month on gas, tolls and other expenses that were not in our budget.

I loved being a “permalance” travel writer and fact checker at Brides magazine, a post I held for nearly a decade.

But as my children — and their needs — grew, the few days a week I was required to be in the office became a logistical nightmare. Then, when the recession ripped apart lives, I was laid off. At the time, I made $33 an hour, plus the freelance work I did on the side. I had about $17,000 in my 401(k) and very little debt.

Rather than have me take another commuting job, my husband and I decided I’d try full-time freelancing from home so that I could be there for the girls and their slew of activities. Besides, the math said my inconsistent paycheck didn’t trump hubby’s consistent wages, which were boosted by extras like overtime and holiday pay. I had none of those benefits.

Knowing When Divorce Is Inevitable

When we were nearing 16 years of marriage, it became clear that divorce was inevitable.

My husband worked overtime, which I felt was unnecessary, while I spent most days alone at home, working for new clients I acquired. The second shift began when the girls returned home from school and lasted until their bedtime. After that, I was alone again — in bed, working and waiting for my husband to get home.

These hours of waiting became longer and longer. I felt inadequate and blamed myself. I even tried to avoid our problems, thinking we could make it work until our daughters went to college. And like many couples going through major marital issues, I did some things I’m not proud of. My antics, too embarrassing to detail, devastated everyone in my family.

I was served divorce papers the day after our 19-year anniversary. Afterward, things spiraled quickly. Many court dates and rulings later, including an order that I vacate our home and pack with the police present, I was shattered. Where could I go?

My best friend generously offered a room at her house, but I was too proud to accept and didn’t want to intrude. I moved in with my dementia-addled grandma at her one-bedroom senior citizen’s apartment complex. I slept on the pull-out couch.

The High Cost of Divorce

And I’m not alone. One in five women experience post-divorce poverty, one-third of women lose their homes after divorce, and many women do not receive full child support or alimony. Add to those statistics the fact that divorces can cost between $15,000 and $20,000, and you can see my issues.

Knowing we couldn’t work it out on our own and that our joint bank account was painfully empty (I’m talking tumbleweeds-empty), I applied for a “Poor Person’s Relief” lawyer. Yes, that’s the official terminology for a pro-bono attorney.

My newly appointed lawyer’s secretary (who was also his wife) told me how much the firm didn’t need another “free” client. I felt small. Humiliated. Afterward, I shed what seemed like an ocean’s worth of tears.

When the divorce was filed, I’d only made $5,200 so far that year from freelancing. I was heavily depressed, and I’d cashed out my IRA to try and keep up my responsibilities. Bad mistake.

Having to wait almost a year for spousal support led me to borrow money from my grandma for simple things like gas or to pay for the storage unit where I stored some small items from my former life. Eventually, I humbled myself, got a part-time job at the local pizzeria, and sought help from Social Services.

That daunting and soul-crushing process made me question every decision I’d ever made. How could I, an educated, military-raised, black woman in her 40s, have absolutely nothing to her name? Wasn’t I taught better?

Past neighbors avoided looking at me when they came to the restaurant or, worse, if I had to deliver their order. So-called friends fell to the wayside. The loneliness became unbearable. I fell into a dark hole, avoiding social events, networking, and traveling. Looking for work was exhausting. On top of that, my grandmother’s health was rapidly deteriorating, and I needed to stay with her full time to care for her.

Now I’m emerging from that dark place. Things aren’t perfect, but I have a better relationship with my family, thanks to steady therapist appointments, anxiety and depression meds, and the support of others who have also gone through divorce.

I’m working on getting help for my grandma so I can get a full-time job and save for my own place. Plans are being made. They will come to fruition, eventually.

And the funny thing about that divorce rate? According to a 2015 study by Bowling State University’s National Center for Family and Marriage Research, divorce rates are at a 40-year low.

But rather than being ashamed of my past, I choose to believe it’s part of the path leading to my future.

advice divorced dealing with money and divorce getting divorced

What Happened When I Started Outsourcing Household Responsibilities