14 Women On How They Elevate Other Women In The Workplace 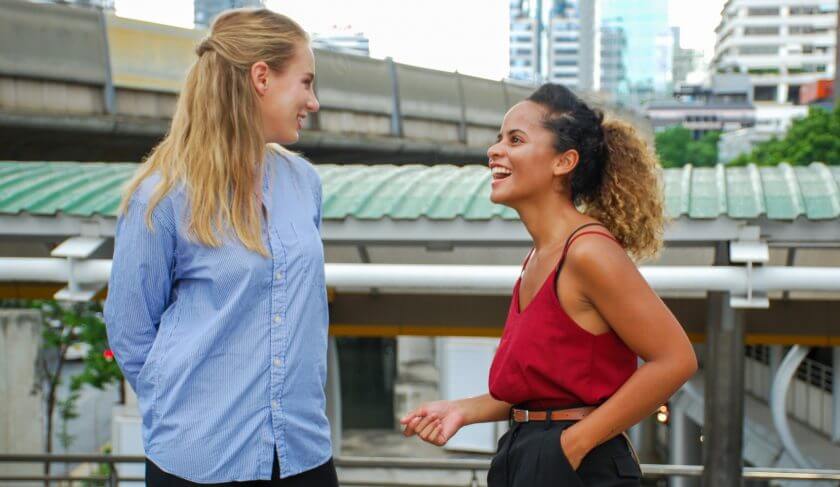 Some of the most creative ways we can elevate our fellow women in the workplace, and other best practices for supporting other women professionally.

Have you complimented a female coworker to your boss? Do you go out of your way to help other women in your workspace stay up-to-date on new jobs and opportunities in their fields of expertise? Is it your policy to write kick-ass reference letters?

When I posed the questions, “What have you done to help ease the road professionally for other women? And, in this time of corona and working from home, what have you done outside of the office to continue supporting the women who work in your space?” the women of the HerMoney Facebook group brought their A-games with responses.

I think it’s safe to say that we would be thrilled to work alongside these 14 women because their actions really do speak louder than words:

Janika D.: “I’ve recruited about a dozen women to work at my university in a wonderful and well-paid part-time role with full benefits. Many of them were ‘re-launchers,’ and this job was just the boost they needed to find their dream jobs in law, higher education, business, etc.”

Dayspring C.: “I could have a full on degree in leveraging relationships to share feedback up the chain. I’ve repeated colleagues’ ideas and credited them when others have taken credit by saying, ‘Oh yeah, I think Gianna mentioned that last week.’ Being sure to share positive feedback about mundane interactions that supervisors would not ask about such as, ‘Jillian really briefed me well for that presentation and answer my follow up question promptly and thoroughly!’

I have emailed positive feedback to colleagues so they could keep it for their records.

And, I have bought up needing someone’s help on something when I know it is an aspiration of theirs by saying, ‘this spreadsheet keeps falling to the Bbq burner for me, could Kristen help me with it and possibly take the first pass? I know she’s mentioned that she wanted to be more involved with data driven work.’”

Amanda N.: “I nominate them for awards. In one part because it’s one of my golden PR strategies and in another because I love helping others shine. I’m also always sharing resources or something that I think will be of interest to current and past coworkers. And I share how they help when talking with my boss about a project or something.”

Melanie B.: “I’ve been highlighting women as guest speakers in our weekly online event series through BDN Events. I work for a local newspaper and we’ve moved all of our in person events online. We’ve featured female chefs, musicians, directors of nonprofit organizations, small business owners, and more.”

Kerry M.: “I run my own consulting firm and try to hire female consultants to partner on projects whenever possible. Last month, after working with one woman on a successful project, I nominated her for her city’s 40 Under 40 award. She WON! The 40 Under 40 in this area has absolutely been predominantly white men. We need to nominate ourselves and our colleagues for awards such as these – particularly women who are self employed and the exposure becomes part of marketing opportunities for more work.”

Fi N.: “There was someone on my team two levels below me on the hierarchy who was up for a recently vacated position one level above her. I had been in that exact same role just a few months prior. When it became clear that the company would offer her the position, I sat her down and told her exactly how much I was offered and accepted when I was in her shoes, and how much my friends at my previous company (a competitor) were making for the same level and experience. I then told her not to believe the company when they said they couldn’t go over $X, that she was worth more and should ask for more. She was able to secure a competitive salary for herself and accepted the job! I was so happy for her, and hope that I helped contribute to closing the gender wage gap.”

Teresa B.: “I created a  “Nurses” Facebook page. We post jobs, advertise RNs who got awards, professional growth education opportunities. I mentor students, created Pinterest categories with easy to understand graphics in anatomic sections and allow students and nurses to access. I nominate my fellow RNs and support staff each time there is an opportunity. I created a bulletin board with pictures of nurses receiving awards, advanced degrees and certifications and praise letters.”

Jeanette O.: “I worked in a male dominated industry and the few women in the room were often interrupted or talked over. If I noticed it happening I would make sure to jump in and say ‘I think Lisa wanted to make a comment on that.’”

Lauren O.: “I co-founded a Women’s Leadership initiative at my company that provides programming, networking, and service opportunities for women across the organization. We’re still getting it up and running but have had over 100 women join so far! We created several chair positions to provide women with leadership opportunities and it has been really exciting to see women that aren’t otherwise in leadership roles step into these positions and demonstrate their skills in this area. We have a lot more work to do, but it’s a start!”

Lori W.: “Many years ago, my organization was going to be making job cuts. I was the boss of a team of three women. I was offered the option to take anyone of their jobs and they would be cut. I chose to take the job cut myself because the three employees were all in much more dire financial situations than I was. I knew that I would get another job easily enough. Two of the three left within a few months. One of those women has been my best friend for 25 years. I hired her to work with me several years later.”

Claudia G.: “I am proud to say that just today I helped a young woman by setting her up with informational interviews. Almost weekly, I send thanks to someone and copy the person’s manager. What’s been harder? Touting my own horn. I’m doing that more now and also accepting compliments more frequently.”

Karen M.: “I am coaching a recent college grad on her job search to help give her a strong start over those waiting until the economy improves. I also chose to mentor a less experienced team member rather than lay her off to hire someone with more experience…she turned out to be a rockstar. Working on starting a more formal mentoring program at work so if anyone has done this i I would welcome connecting on this topic.”

Kass B.: “Once found out that I, a new hire at the time, was making more than a coworker who had been there for 2 years. Helped her write a letter to management demanding a raise to what I was making, plus the yearly raises she had received on top. It worked!”

Nichole G.: “I have a very diverse network and have women friends who are ‘Girl Bosses’ (really just Bosses) in tech, finance, operations, and HR. Any chance I get, I plug in these women to opportunities to connect and network with leaders or people that would broaden their networks. I work in HR and when I see jobs open up that they would be awesome for, I send over the role and offer to write a recommendation.

Often, these are women who are underrepresented and just aren’t known, even though they are amazing.

Additionally, where applicable, I always give credit where it’s due. I think it’s so important to lift other women up. They make me better, give unique perspectives that are missing from the conversation, and I want them to thrive and get the opportunities they deserve.”

How Small Businesses Can Support Diversity and Inclusion