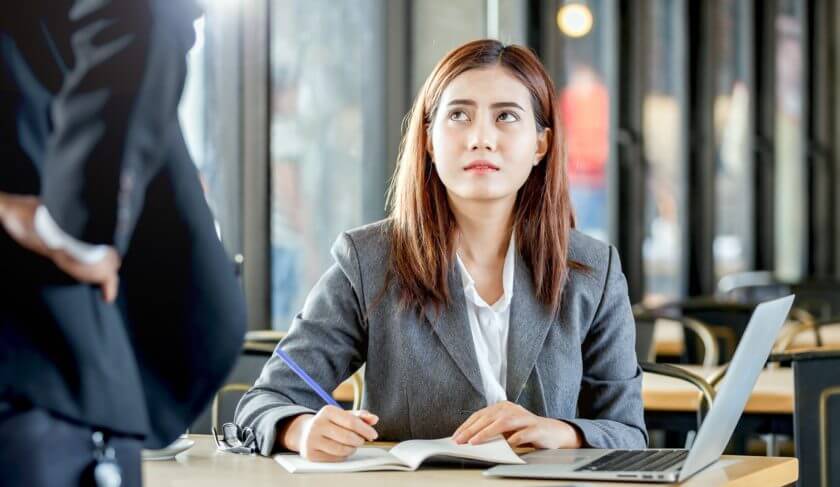 It’s time to say goodbye to mansplaining. Women in all industries can change the script, and start gaining the respect we deserve. Here’s how.

It’s 2022 and yet — yet! — women still have a long way to go to reach pay parity with men. We just marked Equal Pay Day — a day we’d rather scrub from our calendars entirely — which reminded us that while females make up 47 percent of the workforce, we still only earn .83 cents to every dollar a man earns. And when it comes to leadership positions, there’s still an incredibly tall ladder for us to climb. Today, just 20% of Congress members are female, and according to data from the Pew Research Institute, just 5% percent of Fortune 500 companies have female CEOs.

Even though women are grossly underrepresented in the halls of power, we’re continuing to trailblaze, creating job opportunities and transforming markets. 2021 was heralded as “a year of historic achievements for women-owned businesses,” by the SBA — their office helped nearly 90,000 female-led businesses in 2021, and saw the most extensive expansion ever to its Women’s Business Center network.

Yet at the same time we’re making incredible gains, female professionals must fight for their voices to be heard. As Vice President Kamala Harris iconically let the world know, you sometimes have to make it known that you’re speaking. As we look ahead to 2023 and beyond — and investigate all the ways we can bridge the gender wage gap once and for all, we’re taking a look at some of the industries that still talk down to women, and how we can rewrite the script, one empowered woman at a time.

The Industries Still Talking Down To Women

So, spoiler alert: It’s all of them. Yes, some male-dominated industries are bigger offenders than others, but we’ve heard from HerMoney’s readers and listeners around the world that it still happens in every industry, no matter your title or position. We wish more than anything that this wasn’t the case, but we hear all too often of women having negative encounters with ill-informed men, in industries from medicine to graphic design, and everything in between.

With that said, fields like technology and finance, both of which have been dominated by men since their inception, can often feel like a “boy’s club,” says co-founder of Jetson, Kiley Taslitz Anderson. “When working in male-dominated industries, it’s not always about what’s explicitly said; it’s also about what isn’t. There’s an unspoken rule that women’s commentary isn’t welcome. We aren’t allowed the space to speak up,” she shares.

Thankfully, there are organizations working to change the script — organizations like Girls Who Code (founded by Reshma Saujani, who you don’t want to miss on the HerMoney Podcast!) are seeking to inspire new generations of female engineers.

One big issue to watch out for: Even in the modern, emerging tech space, women are often expected to take on creative or artistic roles, Anderson cautions. “A disproportionate amount of women who work in data and analytics aren’t taken seriously. Their ideas are called ‘cute’ when they are better than their male counterparts, as a way of invalidating their work,” she explains.

Women also often encounter issues in the media and sports industries. LeBaron Meyers, president of Not Me, grew up around collegiate and professional football, then worked in investment management, radio broadcasting, and media. In these male-dominated industries, she encountered both advocates for women alongside individuals who talked down to women. “If someone becomes aware of their bias and consciously chooses to maintain that line of thinking and endorse a culture reflective of it, that’s toxic — and when surrounded by others who are similar, it becomes pervasive,” she says.

Yes, It’s Toxic. Here’s How To Change The Script

No matter how, why or where you face this type of discrimination, you should feel empowered — and frankly, angry enough — to push back against it. As chief engagement and brand officer for EHE Health Joy Altimare explains, implicit bias affects every industry, and men continue to talk over women, ‘mansplain’ and/or exclude women from meaningful conversations. How come? For starters, they get away with it, she says. Men often have majority power in the executive suite, and women continue to allow it to happen. But we can change it, and help create a better, more equal space for the women coming behind us by exercising these tactics:

Call it out when it happens

You’re in a meeting, and a male colleague shuts down your idea, doesn’t let you finish your sentence or otherwise degrades you. Although our instinct may be to sit quietly and collect our thoughts before a fight or outburst occurs, Altimare says we should resist the temptation to sit quietly. Instead, call it out. Ask the man to repeat whatever he said. “Often, they will refuse, as they recognize that it was inappropriate. I guarantee they will never speak to you that way again,” she says.

Make space for yourself

Women are unfortunately often tasked with making space for ourselves when male counterparts box us out of a conversation. We have to get more comfortable speaking up and asserting ourselves. Anderson says we can start by saying: “Excuse me, I have something to say,” or “I’m going to take the floor now.”  What’s the worst that could happen? Well, it’s not beyond the realm of possibility someone could call us “bossy” or another derogatory name, but we don’t have to feel ashamed if that happens — that only reflects poorly on the name-caller, not us. “Men often call strong, vocal women derogatory names as a way to shame them from speaking up, but we are taking our power back,” she says.

Remind interrupters that you are speaking

When you’re discussing a new project, client, product, service or something else related to business, all your ideas should be welcome and brought into consideration. Suppose you find that a male co-worker or manager keeps interrupting you when you’re sharing. In that case, Altimare says to keep the same tone of voice, don’t become emotional or visibly upset, and instead handle their passive-aggressive interruptions by repeating: “I’m speaking,” or “I have more to share,” and similar phrases that make it clear you’re not okay with being interrupted, and that you still have the floor.

Support other women and remind the room of their words

There is power and strength in the female community, and together, we must stand up for one another. Altimare says that when a woman is speaking during a meeting and a male colleague repeats her words as if they were his original thoughts, it’s time for the rest of her female colleagues to step up and speak up. “Remind the room that the idea is great, and it was great when said female colleague stated it moments earlier,” she continues. “This support is instrumental in changing the dynamic.”

12 Female-Founded Companies to Support During Women’s History Month (And Always!)