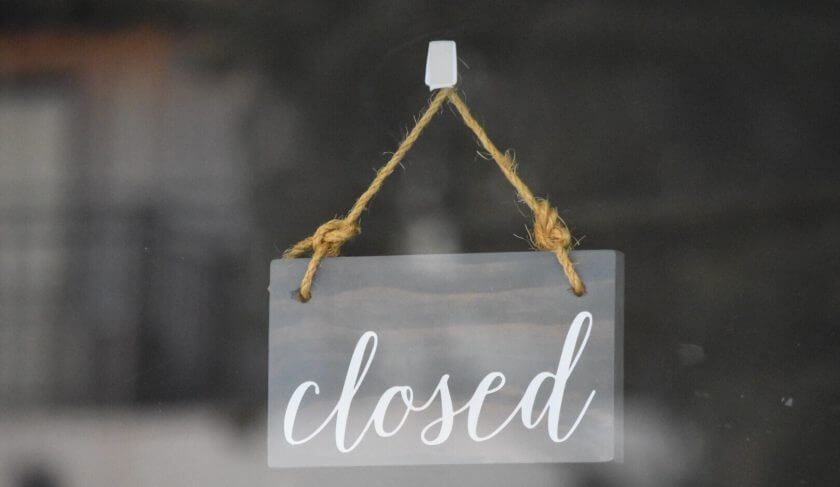 Knowing when to call it quits will likely save you further heartbreak — and lots of money.

Starting a business is tough. But, as some owners have experienced, closing up shop can be even tougher. While you may hate to admit it — I know I did — it’s emotional.

Cody McLain, the founder of SupportNinja and digital creative agency WireFuse, describes the moment of letting go beautifully: “Building something from scratch just for it to end up like a sandcastle at the shore waiting for the tide to take it away is what closing shop feels like. It’s not easy, and it hurts your pride more than anything else.”

But knowing when to throw in the towel will save you further heartbreak — and lots of money. Here are six signs that point to the end, along with accounts from owners who wished they’d seen them sooner.

After two to three years, it’s time to take your company’s financial temperature. If you’re still not turning a profit and you’re out of money, this does not mean that it’s time for a loan that puts you further into debt.

Instead, it may be time to seriously consider cutting your losses so you don’t wind up in personal financial trouble. After all, the whole purpose of incorporating (or having limited liability) is so that your business and personal finances are separate. The last situation you want to be in is personally repaying a business loan that you can’t afford.

Jo Clarkson, an operations director at The Alternative Board, an organization that provides executive peer advisory boards to businesses, says this scenario is at the top of her alert list.

“One of the biggest red flags is when business owners are personally putting money into the business, especially if they are using a credit card to do so. It happens more often than you might think,” Clarkson says. “At that point, even if the business has real potential, it’s probably better to find another business that’s making money until you’re ready to give it a go again.”

Taking on that debt doesn’t just hurt your bottom line, either: Clarkson points out that personal financial losses can also be devastating to your family and health. “It’s better to regroup and start again,” she says. “Accept that you’ve learned a lot of great lessons in the process — then keep plugging away.”

Your Personal Health Has Gone South

If you find yourself becoming unhealthy — whether through weight gain, weight loss, constant fatigue (which is a big difference from being tired as an excited entrepreneur), or heightened anxiety, then you should evaluate whether your business is worth a decline in your physical and mental health.

Is that dreadful feeling that you used to get in the pit of your stomach before walking into your 9-to-5 — you know, the feeling that caused you to quit your old job and start your business in the first place — the same feeling you get when you walk into your own HQ? If so, this might also be a serious sign to reconsider at least the direction of your business.

Michael W. Frishberg, co-founder of Cliffside Software, knows this feeling well. He started his company in 1993 with his brother, running it for seven years before calling it quits in 2000.

After spending two years looking for a buyer, eventually running out of money for payroll, his brother fell ill from being overworked and had to have his large intestine removed in an emergency surgery. “I found out right before leaving on a three-week sales trip, and I wasn’t sure I’d ever see him again,” Frishberg says.

Anita Laney, CEO of Professional Partnering Solutions, also had a business self-destruct, hurting her family along with it. “The signs were everywhere, but I didn’t heed them early enough to save my company,” she says.

“My relationship with my partner — in business and in life — was deteriorating. We couldn’t agree on anything in the office and at home, and we were barely speaking. Lawsuits ensued, bankruptcy followed and my family was in turmoil. The emotional and financial hardship of my failed business nearly destroyed me.”

Your Mission Loses Its Luster

Starting to forget why you started the business to begin with? This is definitely a sign that your company is heading toward the danger zone. It could mean one of two things, and both usually lead to the same unfortunate outcome.

First, it could be that your mission is unclear. If vital checkpoints like objectives and a clear customer are missing, you could be spinning your wheels, spending unnecessary money and still not feeling fulfilled.

Or it could mean that you’ve lost your passion for your mission, one of the biggest propellers when times get tough. Without this drive, who or what else will push the business forward?

Alan O’Rourke founded and ran a successful design agency for 10 years, and for most of his life design was his “absolute passion.” But “the day I did not want to go into work (was when) I realized it was not fun to own my company anymore. On that day, I started planning to throw in the towel.”

You Love Your Product More Than Your Customers Do

Is your business providing a solution that customers are actually looking for? Or is your company centered on something you care about and really, really want others to care about, too?

If it’s the latter — and you’re not seeing positive feedback through dollar signs — it might be time to shut it down.

Jimi LaSante experienced this firsthand with a mobile gaming business he owned.

“I thought I had the best product in the world and everyone would be falling head over heels in love with it. However, the exact opposite happened,” he says. “The short-lived honeymoon of starting up fizzled fast. People won’t even download free copies of the flagship game.”

His light bulb moment? “I finally realized … I was listening to me and not my customers. I was trying to force-feed my idea like they were babies eating strained peas for the first time.”

Your Key Employees Are Leaving

The saying, “You’re always the last one to know” is especially true when the expert team you built starts to leave. If this is happening to you, you must ask yourself: Is there something they know that I don’t? Have my employees tried to tell me something, and I simply didn’t listen?

Pat Council of True Thoroughbred Enterprises in Jacksonville, Florida, says she wishes she would have asked those questions before having to close her last business. “My key personnel were starting to leave. Everyone in my office could see what I was not willing to see,” she says. “The morale was low and my attitude toward my agents was indifferent. I liked them, but was blaming them for not working harder to increase revenue.”

Sleep mode is a dormant status that allows you to slow down your business and resume it at a later date.

“People rarely think of purposefully stagnating their businesses instead of completely throwing in the towel,” McLain says. “You can completely strip your business down to its bare bones and wait for your market to rebound (if it has boom-and-bust cycles), before coming back strong.”

But there’s a catch: “You have to have an alternative means of income for this to happen, because your business will not be generating any revenue during this time.” If you’re on the verge of having to close your doors and sleep mode isn’t a viable option, then it’s time to bid your company adieu, thank it for the memories, and move on.

This piece originally appeared on DailyWorth on April 8, 2015.