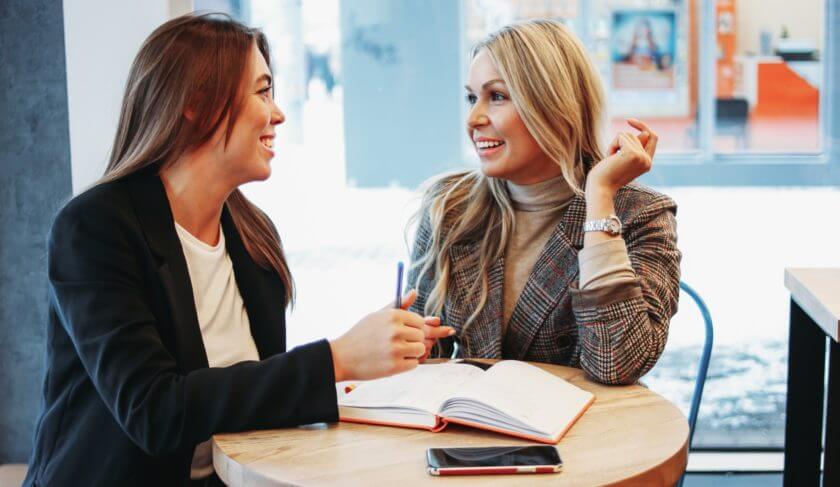 You’ve landed the job interview you wanted. Congrats! It’s time to put your best foot forward. Here’s what to avoid in the interview (+ what to say instead)!

One pandemic takeaway that we’re taking with us for decades to come (i.e. forever)  is the “great awakening” many of us have had about what makes us happy and what doesn’t. Because nothing tends to put that into perspective quite like stay-at-home orders, tight budgets, and pajamas for days.

If lately it’s felt like everyone you know is channeling this great awakening into their careers, that’s because we are — 55% of us are planning to find a new job this year, according to a recent Bankrate survey. The phenomenon even has a name: The Great Resignation. And it’s not likely to wane anytime soon, as more of us seek everything from pay raises and title changes to a hybrid or completely remote work environment.

If you’re one of the millions looking to make a change, it’s time you did a little prep work. Maybe it’s been a while since you walked into a job interview, and maybe they seem a little more intimidating than they did a few years ago. (What is it about Zoom introductions that feel so much more tense and awkward than an old-fashioned handshake ever did?)

Thankfully, no matter what kind of interview you’re prepping for, the old rule of thumb to put your best foot forward hasn’t changed, even in this brave new digital world. Here’s a look at eight phrases to avoid using during your interview — and what to say instead — so you can sell yourself as the absolute best person for the job, and secure the offer you want. You got this!

Try to avoid answering in the negative, which can sow doubts about your credentials and abilities, says Allison Cheston, Career Advisor. Instead, you’ll want to project an attitude of facility and flexibility.

Say This Instead: “I’ve had experience doing Y in my last role, and have taken a class recently in X, so I am confident I can hit the ground running.”

This is a better way to show you’re prepared to take on new challenges, Cheston says. Try to reply in the affirmative to job interview questions, even if you’re answering the question in a slightly different way, she says.

If you say you’re flexible, the truth is, you’re much more likely to get low-balled, Cheston says. If you’re flexible, it implies that you’re willing to take whatever figure is offered, and that you have no other prospects. It’s time to get paid what you’re seeking and what you deserve.

Say This Instead: “My skills and experience put me on the higher end of the salary range for this position. Let me explain…”

Do your homework on the salary range for the role you’re applying for at the company prior to your interview. Indicate that you believe you’re worth a higher salary, and share details from your background to back it up, she says.

Prospective employers love to ask you behavioral questions in an interview — like, “Tell me about a time when you had a misunderstanding at your workplace,” or “Can you give us an example of how you resolved a communication problem with a co-worker?” You really want to be prepared for these questions, or your interview could get derailed quickly, Cheston says.

Say This Instead: “I learned so much from that experience…”

Practice a positive narrative of how you learned from conflicts and missteps in a previous role. Remember that employers don’t want to hire someone who is flawless and who has never stepped out of line — they want to hire someone who can learn important lessons on the fly, resolve conflicts when they come up, and admit when they are wrong. Present yourself in the best possible light by showing what you learned from the experience + the insight you gained, Cheston says.

“In nearly every interview, you should plan on being asked about your perceived weaknesses,” says Krista Demcher, Business Strategist and CEO of the ACORN Method. Before you walk into an interview, make sure you’re ready for this question with a solid answer. In other words, for the love of god, stop saying that you’re a “perfectionist” or that you “work too hard.” Those are the classic not-real-at-all, so-fake-you-can-spot-them-a-mile-away kinds of weaknesses that nearly everyone has tried over the years. You’ve got to give a real answer so your interviewer knows you’re capable of an honest self- evaluation

Say This Instead: “In the past, I have struggled with…”

When you’re asked about your weaknesses, it’s time to paint a picture of who you are. For example, you could say, “I love new challenges and I get completely immersed in the projects I work on. But I’m a big picture person who sometimes struggles with details,” or you could say, “Sometimes I get too in my own head, and I forget that other people outside of the marketing department don’t speak the same lingo that I do, so I need to slow down.” Whatever you say, be honest with your answer, and look to say something that adds depth to your character, while still also portraying positivity. Employers know that a candidate who can verbalize a weakness is someone who is probably also committed to self improvement. Again, they don’t want you to be flawless — they want to see that you’re willing to improve and learn from your mistakes.

Even if it’s true and your boss was an absolute nightmare, it’s never appropriate to trash talk your current or former employer. Ever. Even if you’re asked a leading question from an interviewer. When you say negative things about a previous employer, it sends an unprofessional message loud and clear: If she’s willing to trash talk that company, she will be willing to trash talk us. “Not only can the hiring manager imagine you saying the same things about them in 6-12 months, it also makes you come across as gossipy and difficult to manage,” Demcher says.

Say This Instead: “There are aspects I enjoyed about my former position, but I am looking to make a change.”

Let’s get real here for a second: The hiring manager wants you to succeed in your role — even enjoy your role — but their first priority is how you will benefit the company. In other words, make the interview less about what they can do for you, and more about what you can do for them, Demcher explains.

Say This Instead: “How can I help the organization achieve objectives?”

In your interview, it’s your job to take every opportunity to show that you’re there to help advance organization. Show them how you can be an asset to the organization.

Is there anything that’s a worse conversation-killer than a one-word answer? We’ve all been stuck at a networking event with a dude who did just that, leaving us to desperately scan the room for an escape — don’t be that dude. The interview is your chance to sell yourself as the right hire by being your charming + engaging self. Show them that you’re interested in the job.

Say This Instead: Some questions will necessitate a “Yes” or” No,” and that’s okay. Your job is to then elaborate by answering why.

This is a great opportunity to weave a story into your response to the interviewer’s question, Demcher shares. “Stories are some of the most impactful messages you can send in an interview, and a good story helps you stand out from the crowd.” Don’t be afraid to show enthusiasm and personality.

You should always have several good questions to throw out at the end of an interview. Managers want to hire curious, engaged, and thoughtful people. Those are the kind of people who prepare good questions and aren’t afraid to ask them. When a hiring manager has spent their time telling you about the role and the company, the most important thing you can show them is that you’ve put some real thought into taking the role, Demcher says.

Say This Instead: “Yes! I have several.”

Then proceed with your questions, starting with the most important ones first, since time may be running short. It may be that you need to follow up via email with additional questions, but that’s okay, too. This gives you a chance to keep the lines of communication open with your prospective boss. You got this!