By the Numbers: Being LGBTQ+ in America 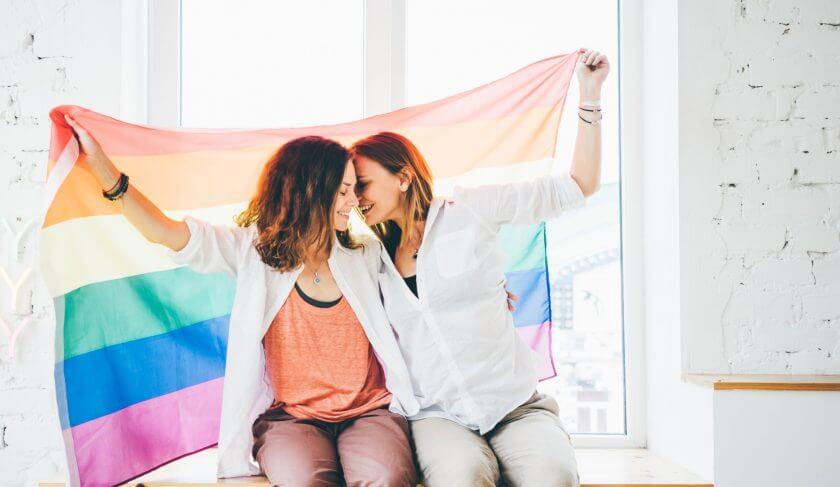 Bias and lack of protections create a cascade of financial strikes for sexual minorities. These 12 numbers show the state of LGBTQ economic inequality in the U.S.

Stable employment, access to healthcare, and the ability to save and provide for our families and ourselves as we age — all women face obstacles to achieving economic equality in these areas. But the country’s 5.1 million lesbian, gay, bisexual, transgender and queer (LGBTQ+) women deal with additional layers of bias, stigma and lack of legal protections simply because of who they choose to love and how they identify.

Federal law did not explicitly bar employers from firing or discriminating against a worker for their sexual orientation until this time last year. On June 15, 2020, the Supreme Court ruled that Title VII of the Civil Rights Act that protects sex discrimination in the workplace applies to gay, lesbian and transgender workers.

This is huge step, and we will pause for a moment of celebration. But there’s still a lot of work to do. Decades of anti-LGBTQ+ laws don’t erase years without protections from discrimination in employment. And sex discrimination could still go unchallenged in education, housing, health care and credit — the basic pillars of economic security.

An in-depth report on the financial penalty for LGBTQ+ women in America, co-authored by two think tanks — the Center for American Progress (CAP) and the Movement Advancement Project (MAP) — provides a snapshot of what it’s like for LGBTQ+ women:

*NOTE: In these and all the statistics cited in this article we use the gender, racial and sexual orientation language and acronyms used by the original authors.

12 Numbers Everyone Should Know

Here’s a more in-depth look at 12 key numbers that illuminate the economic status and challenges that LGBTQ+ people face.

50%: The percentage of LGBTQ+ workers who just now got federal protection from discrimination

Roughly 3.4 million LGBTQ+ workers and more than 500,000 transgender workers age 16 and older in the U.S. live in states without statutory protections against employment discrimination based on sexual orientation and gender identity, according to an a report from The Williams Institute on Sexual Orientation and Gender Identity Law and Public Policy at UCLA School of Law.

43%: Percentage of LGBTQ+ employees who are not fully “out” at work

A Glassdoor study conducted by Harris Poll found that more than half of LGBTQ+ employees and 30% of non-LGBTQ+ employees experienced or witnessed co-workers make anti-LGBTQ+ comments.

No wonder nearly half (47%) of LGBTQ+ employees believe being “out” at work could hurt their career (cost them a job, promotion or getting assigned to projects). According to OutLeadership.com, 43% of LGBTQ+ workers are not fully “out” at their place of employment. (Notably, fewer than 0.3% of directors at Fortune 500 companies are openly LGBTQ+.)

Up to 10%: The amount of time LGBTQ+ workers spend covering their identities

There’s a cost to companies when employees remain closeted: 9% of LGBTQ+ employees have left a job because the work environment wasn’t accepting. And LGBTQ+ workers who remain report spending valuable time guarding their closet door, paying what amounts to an “inclusion dividend”  — LGBTQ+ employees reported to OutLeadership that they spend up to 10% of their productivity covering their identities at work.

12%: How much less the average lesbian woman makes compared to the average heterosexual woman

According to UBS, lesbian respondents reported earning an average annual salary of $45,606 versus $51,461 reported by heterosexual women. The earnings gap was even wider between gay men ($56,936) and heterosexual men ($83,469).

A 2008 study cited by the CAP/MAP report found that transgender women who transitioned from male to female saw their wages fall by nearly one-third. After transitioning from female to male, however, transgender men made slightly more.

The gender earnings gap is alive and well in the LGBTQ+ community where lesbian women earn less than their male counterparts (gay men) and bisexual women make less than bisexual men, according to Prudential’s 2016/2017 “The LGBTQ+ Financial Experience” study.

Gender-based income inequality is particularly pronounced among LGBTQ+ couples. Census data shows that the average household income for female same-sex couples was nearly $100,000 versus $130,000 for the average same-sex male couple.

$0.16: Earnings gap between a married woman in a same-sex couple vs. woman in an opposite-sex marriage

The general wage gap between men and women overall is well documented. For every $1 a man earns, a woman earns $0.82. That’s the average for all women. The per-dollar number for Black women is $0.61. It’s $0.90 for Asian-American women, $0.57 for Native American women and $0.54 for Latina women.

The study’s author posited that women in same-sex couples were less likely to have children and, by remaining in the workforce instead of taking parental leave, were able to reap work-related benefits.

The federal poverty level is around $12,000 for a single-person household. Among the LGBTQ+ community, 22% of people earn less than that compared to 16% of non-LGBTQ+ people. Bisexual women and transgender people of all sexual orientations report the highest poverty rate of all: Roughly 30% for each group.

49%: The rate of homeownership among the LGBTQ+ population

The Fair Housing Act and the Equal Credit Opportunity Act prohibits discrimination against borrowers on the basis of race, color, religion, sex or national origin. Sexual orientation and gender identity, however, are not protected under federal lending laws. That might be one reason for the lower homeownership rate among the LGBTQ+ population compared to the overall U.S. population (49% versus 64%), according to a 2018 Freddie Mac study.

A 2019 report from the Movement Advancement Project, the Center for American Progress, GLAAD and the Human Rights Campaign cites several studies that reveal discrimination in the hunt for housing. One found that 15% of same-sex couples encountered discrimination when trying to rent or buy a home. And in the past year alone, 30% of transgender househunters reported that they had experienced housing discrimination.

0.2%: The additional amount in mortgage interest and fees paid by same-sex borrowers

Researchers were able to calculate the pervasiveness of mortgage discrimination when they compared the loan data of same-sex couples to different-sex couples. Their findings, published by the National Academy of Sciences journal, revealed that same-sex couples were 73% more likely to be denied a mortgage than financially similar heterosexual couples.

When same-sex couples were approved for a mortgage, they were offered inferior terms and paid, on average, 0.02% to 0.2% more in interest and fees than different-sex borrowers — an upcharge was calculated to be equivalent to $8.6 million to $86 million in additional interest/fees nationwide per year.

57%: The percentage of older LGBTQ+ women concerned about running out of money

Most women are familiar with the “bag lady” syndrome, where we fear we’ll end up homeless in old age. LGBTQ+ older people are particularly vulnerable to financial insecurity due to employment concerns, a lifetime of discrimination and smaller support networks.

According to the “Out & Visible” report from SAGE (Services and Advocacy for GLBT Elders), approximately one in three LGBTQ+ older people (age 45 to 75) live alone, compared to 21% of non-LGBTQ+ people. Older LGBTQ+ women are more concerned than their male counterparts about having enough money to live on (57% vs. 49%); not being able to take care of themselves (51% vs. 39%); and being a burden to those they love (42% vs. 30%).

Saving for the future is challenging for all households, but studies show that the LGBTQ+ population is struggling more than the heterosexual counterparts. According to a UBS report on LGBTQ+ retirement planning, the median retirement savings for same-sex couples is $66,000 versus $88,000 for straight married couples.

One reason might be access and participation in the market: The Prudential study cited early found that the LGBTQ+ population was less likely than the general population to have an employer-sponsored retirement plan (e.g. 401(k), 403(b), 457), an individual retirement account (IRA) or own mutual funds or individual stocks.

1% of GDP: The cost of homophobia and transphobia to a country’s economic well-being

Plenty of studies have made a business case for inclusivity in terms of gender and race. But companies that venture beyond this narrow definition of diversity reap even larger rewards. According to Credit Suisse/McKinsey, companies that include LGBTQ+ employees outperform their less-inclusive peers by 10% on average.

In addition to the ethical and moral obligations we have as individuals, we, as a country, discriminate against this community of entrepreneurs — job creators, taxpayers, essential service providers — at our peril. The cost of prejudice is enormous.

For now, we’ll leave you with that thought, and encouragement to check out our special list of resources for LGBTQIA people and their allies.

Sign up for our free weekly HerMoney newsletter to get the latest delivered to your inbox every week!