How to Go Green on Your Commute — And Save Money 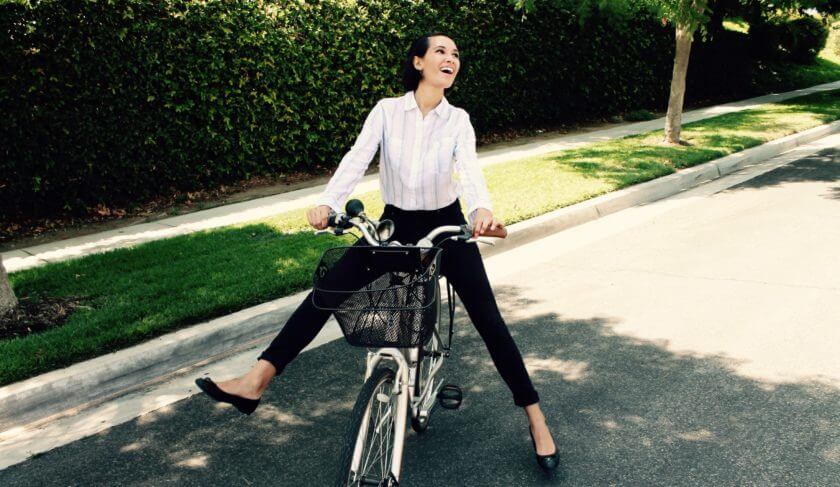 If you’re thinking about biking to work or walking, having a plan (and some fallback options) will support your success.

Buoyed by balmy weather, concerned about the climate, irritated by gas prices – or maybe all of the above – you may have wondered: Is it time to take this car and shove it?

From health, environmental and financial perspectives, the reasons for engaging in active transportation abound.

But many factors affect your commute choices. There’s the distance you need to travel, the number of stops you make throughout the day, weather, and safety.

Noting that multiple elements make this challenging for anyone, Deborah Salon, Ph.D., associate professor at Arizona State University’s School of Geographical Sciences and Urban Planning, says it is especially so for women.

What you’re wearing can be a challenge for being active on your commute, Salon says. Based on her experience, she says, she thinks women also tend to run errands more often on the way to and from work, from stopping at the store to picking up a child.

For women and men, Salon says she thinks “the number one concern about biking almost anywhere in the United States is safety.”

That noted, the benefits to active transportation can be significant.

One advantage of bike or walk commuting is that you can reduce the number of cars that your household needs, Salon says, identifying it as “a huge money-saver.”

“One of the big surprises for a lot of people is that the time is similar,” especially if you’re talking about biking, she says, referring to distances of a couple miles on city streets.

Salon recalls she and some of her colleagues used to pick up children from a daycare two miles from where they worked. Every once in a while, “I’d be going on my bike and I’d see someone else in their car, and we would get there at the same time,” she says, adding that she would have gotten some exercise and they were just annoyed by the traffic. “Sometimes I would beat them there.”

Noting that you don’t get caught in traffic nearly as much, Salon calls biking “more reliable.”

“You know it’s going to be 15 minutes,” she says. “It’s almost hard to believe if you’ve never experienced it personally.”

Salon isn’t alone in recognizing the benefits of walking and biking as a means of commuting. Measuring people’s happiness with their commute, Oliver Smith, Ph.D., discovered that people who walked and biked had “significantly higher commute well-being.”

It can be “a time to process your thoughts,” says Oliver Smith, Ph.D., an engineering associate with the Portland Bureau of Transportation. “ I just love the solitude.”

How to get started

First, check your gear. If you’re walking, make sure you have comfortable, sturdy shoes; if you’re biking, you’ll need a tuned-up bike.

“You don’t have to get a really expensive bike, but get a bike that fits you,” Salon says, adding that you should not only feel physically comfortable on the bike, but also that you’re in good control. If you’re not comfortable on your bike, or biking in general, spend time practicing in areas without traffic, Salon suggests.

If you’re wanting to do a longer commute – say, five or ten miles – you might want to think about an electric bicycle, according to Salon. She says she hears from friends and family members who have them “how incredibly easy they are to ride, how enjoyable they are, how fun it is, and how much it increases how far you feel you like you can go.” What’s more, she adds, it can help solve “the sweaty problem.”

Last but not least: Make sure you know where you’ll be parking your bike and bring a lock for it.

“The first time is not going to be perfect so don’t let that discourage you,” Miers says.

Noting that you don’t need to take an all-or-nothing approach, Miers says you don’t have to give up your car completely and walk or bike to work exclusively.

It could be one afternoon or morning a week that you’re doing these things, she says. That makes a difference on highway congestion, and, she says, “it can definitely benefit you in being able to have … a change of scenery and have some time outside.”