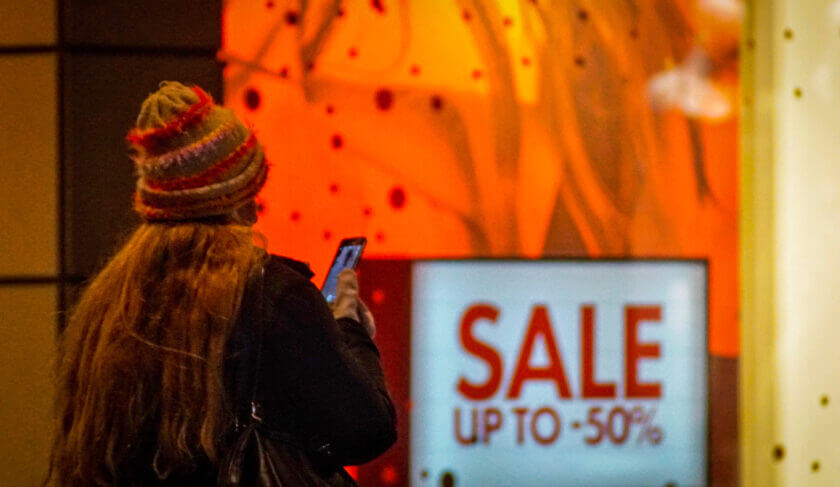 Our smartest online and in-store strategies for tracking down great Black Friday bargains this holiday season.

Holiday shopping season is here, and stores are already bombarding our inboxes with their latest sale circulars and promotions. But with inflation sky high and a lot of budgets tight, are we in a position to take advantage?

A recent Holiday Financial Stress Survey found that 78% of respondents already have credit card debt and 66% are worried about their financial health. However, many of them still plan to spend more than $1,000 on holiday spending this year, because they feel like they owe it to their family and friends. With that in mind, finding the best deals this season is more important than ever for a lot of Black Friday shoppers, and that means looking out for those always-appealing doorbusters. But in a time that so much shopping has moved online, are in-store doorbusters the same as they used to be?

In many cases, you may discover more companies are offering a lot of the same deals online and in stores. So, there’s probably not a reason to go in person and deal with the crowds. “Any kind of limits are usually due to inventory because they aren’t carrying particular items locally, so deals may be only online; alternatively, some deals may be in-store only because they’re related to perishable items, though this is going to be most common with retailers like warehouse clubs,” notes Ramhold.

Here are some of the best strategies to use for your Black Friday shopping expeditions:

Identify the best items to buy

As with all shopping seasons, there are certain things that are best to buy during a doorbuster deal and others you can hold off on. “The best deals that may be labeled as doorbusters are likely going to be on electronics, so deep discounts on TVs, small kitchen appliances, and wearables will probably all be heavily featured this Black Friday.

For example, while WalMart hasn’t discounted all tech and appliances, they are offering 50% off the Roku streaming stick, and $50 off an Apple watch. Laptops will probably also be part of the ‘doorbuster’ deals at some stores, but those may be more prevalent at retailers like Dell, while stores like Target and Best Buy will likely just have notable deals throughout their sales without using ‘doorbuster’ language,” says Ramhold.

Other retailers with big discounts we’ve spotted include the following:

Focus on the standout categories

“You’ll be able to find deep discounts across all categories, but the categories to really watch are tech, like TV’s, and video game bundles, small home appliances, like robotic vacuums and countertop gadgets, beauty products, and fall apparel and footwear,” says Trae Bodge, a shopping expert at truetrae.com. If you focus on those categories, you’re more likely to find the biggest doorbuster deals.

One way Bodge likes to save on Black Friday is to use Slickdeals.net. “This deal site crowdsources its deals from more than 12 million deal seekers who are working together to vote up and vet all the deals out there. The very best Black Friday deals available will be on their front page, ripe for the picking. Slickdeals will also have Black Friday scans on their site,” says Bodge.

Shopping around and seeing who is offering what items at what prices is the best way to get a good deal this season. “Check and see what other retailers are charging for the items you’re looking at; if most retailers are charging the same price, that’s likely an indication that it’s as good as it’s going to get for Black Friday,” says Ramhold. That doesn’t mean it’s a good deal, but it might be the best you can expect. “If it’s something you really want or need, you may just have to decide if saving a little something on a mediocre deal is better than missing out altogether,” she says.

Not every doorbuster is a great deal

Just because something is labeled a doorbuster doesn’t mean you’ve found the lowest price. “One way I like to evaluate the quality of a deal is to use the Paypal Honey browser extension,” says Bodge. Once installed, the Honey icon will appear as you browse online. “When you click on it, you will get a sense of historical pricing, which can be incredibly helpful on Black Friday,” says Bodge.

An important tactic is to look into price histories to see if the Black Friday deal really is as good as it seems or if it’s hit that price before at a random time. “By knowing what kind of price fluctuations the products have seen, you can determine if the current deal is a good one or not, and can shop with more confidence,” says Ramhold. If the pricing is at its lowest right now, it’s a good time to make your move. “Honey may have coupons or cashback to apply to your purchase to save even more,” says Bodge. “If it’s not, add the item to Honey’s Droplist to be notified when it’s on sale next.”

Buyer beware: Not all sales are a bargain

Just like some social media influencers will claim they have more followers than they actually do, some stores like to promote their deals as the best prices of the season or even the lowest of the year, even when they aren’t. That’s often to create a sense of urgency. “These are all tactics to encourage shoppers to buy without looking too closely,” says Ramhold, “so it’s worth being mindful of that and taking the time to do your research.”

Be mindful of the model number

It’s important to check the model number of the item you want to buy to make sure it comes with the bells and whistles you need. “Some retailers release Black Friday exclusive models of electronics that are really hard to compare to other regular models so you don’t really know what you’re getting,” explains Ramhold. Try to Google the model number and if you are only seeing it related to this deal and nowhere else, you may want to give it a pass.

Early Black Friday deals are rolling out now so as long as you have the budget for it, there’s no reason to wait until the holiday itself to do your shopping. “Not everything is on sale right now, but many of the early deals are notable enough that they’re worth shopping before the rush really starts,” says Ramhold, “which means that you can then shop during Thanksgiving and Black Friday and focus on the items left on your list, rather than having to do all your shopping at once.” Starting your shopping early also creates more options. “Many consumers are dealing with tighter budgets this holiday season, and by shopping early and taking advantage of these deals, they can stretch out the process and prevent their wallets from taking too big of a hit all at once,” she says. The bonus? Following this strategy may just help you stick to your holiday budget this year.

Sales may at first glance look similar to what we normally see, but the discounts may not be as significant because inflation has driven up prices. “Basically we’re still seeing the same discounts when it comes to percentages and dollars off, but they’re not going as far because starting prices are higher. In some cases, some discounts may even be knocking product prices down to what their previous list price was, which may not be much of a deal at all,” says Ramhold.

If you have a few favorite retailers, sign up for their emails prior to Black Friday. “This is a reliable way to find out what each retailer is offering, and you’ll often receive advance details,” says Bodge. “If you’re more of a social media user and don’t want to clog up your inbox, you can follow your favorite retailers on social for the intel.”

While doorbusters are still going strong, they may look and feel a little different in our new shopping reality. By planning ahead and conducting some careful research, you can still have a very successful Black Friday – whether that’s one day, or a week in advance.