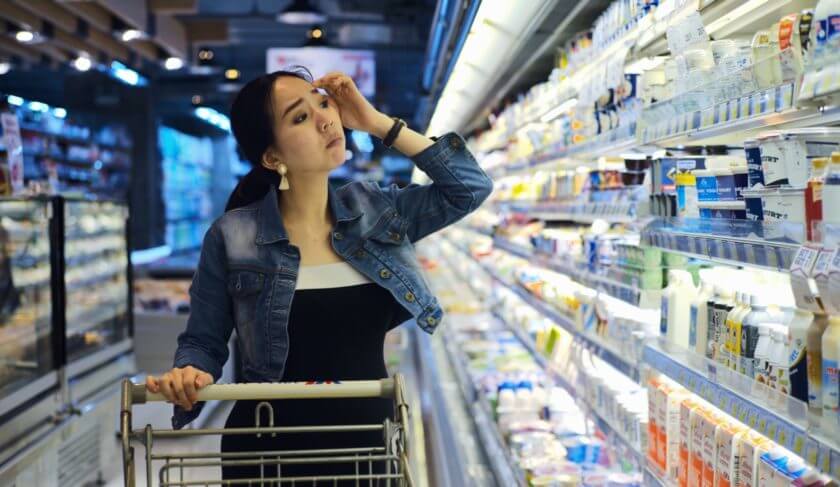 There are some products that will be a little more spendy in the coming months, and we’ve got a rundown on how to prepare + get them for less.

Per the Consumer Price Index, prices increased by 5.3% in August 2021 compared to August 2020—the largest upsurge since August 2008. The vast majority of adults — 9 out of 10 — have experienced price increases since the start of the year, according to Bankrate, 66% of whom say they’ve been negatively financially impacted as a result.

So, just which prices are on the rise?

“Sectors where shipping and freight are less of a factor are somewhat less impacted, but honestly with how interconnected global supply chains are, increases can be difficult to avoid,” Akbari says.

And in terms of when we might see prices get a reset, it’s reasonable to think there won’t be a lot of discounting this year, says David Swartz, Equity Analyst. “It’s typical in a reopening economy that you’ll see higher input prices because demand increases. So commodity prices are up across the board because producers are trying to pass on cost to consumers.”

“There’s some pricing pressure building here,” says Greg McBride, Chief Financial Analyst for Bankrate. While the Fed suggests that the inflation is transitory, there’s a chance it might not be, he cautions. Because it’s not just chips for car manufacturers and kitchen appliances that are impacted… for now it’s, well, kind of everything — including the necessities Americans have to pay for regularly.

“This hits at the issue of stretching household budgets to their limits,” emphasizes McBride. “You may only get one pay raise a year, but you pay these bills all the time, and they’re going up. Month after month you see one expense after another rising.”

It’s a discouraging picture, but knowing what’s on the horizon can help you prepare — and possibly help you work around price increases when they come. Here’s a rundown.

“In the month of June, 80% of the increase in consumer prices came from four things: lodging, transportation services, new cars, and used cars,” says McBride.

For starters, recognize that weekday and off-season stays cost less. If you can guarantee your dates, book in advance with a non-refundable rate. It helps to use credit cards with cash back perks for travel. You can also sign up to hotel booking engines to scout the best deals, and loyalty and rewards programs which typically let you earn free stays or discounted stays over time. But sometimes, booking directly with the hotel is the way to go; it leaves room for negotiation, and thus potential savings.

Why Prices Are Up

When the pandemic eased up, everyone was in a hurry to jump on a plane for vacation, McBride explains. The demand for seats soared, and thus airfare costs.

Book early but not too early: don’t book at the last second or too far in advance, but hit that sweet spot in the middle. Use points and miles, which may sound obvious, but how many times have you just pulled the trigger and paid the price, without even checking to see what your miles balance is? These things make a difference. Be flexible with your dates and destinations — flying off-season and in the middle of the week is cheaper. Shop around to compare prices with a platform like Google Flights or Kayak. Keep in mind that even though flying direct is more convenient, you’ll usually pay more for the privilege, so see if you can save with a layover.

A multitude of factors have conspired to make new cars more expensive — including the chip shortage and strong demand. Manufacturer incentives are down, resulting in large cuts in rebates, fewer 0% APR deals, and higher lease prices across much of the country.

And if there’s a shortage of new cars, that means a shortage in used cars as well, explains McBride.

How to Get Them for Less

Research ahead of time and price-compare across multiple dealerships.  Prioritize features of the vehicle over the brand. Consider paying in cash. Don’t fear negotiation; if you’re leasing, scrutinize the terms of your lease and negotiate for more miles. Don’t purchase more insurance than you need. Avoid superfluous add-ons. You got this.

Rent is typically the biggest line item on the budget for non-homeowners… and prices are going to continue increasing, reports McBride. Why? In part, there’s more certainty in the job market, and as pandemic restrictions end, more young people are moving out on their own.

Get a roommate. Negotiate with your landlord, and anything you notice that’s wrong with the place could be used as leverage to get a better deal. If you know you’re going to stay put, consider signing a two-year lease. This’ll potentially lock in your housing costs to ensure your rent won’t go up after just 12 months. (Which has pretty much happened to all of us who have ever lived in NYC, San Francisco, or any other large + pricey city!)

Homeowner’s insurance has long been on the rise. According to the Insurance Information Institute, prices have increased about 42% since 2009. But exactly why do premiums increase, particularly by such a large percentage? When you buy insurance, you’re buying the ability to replace the contents of your home in case they’re damaged, destroyed or stolen. Because it costs more now to replace the contents of your home, you’re going to pay more to insure it.

As with most things, shopping around is your best friend. Raise your deductible if you can afford it — the higher your deductible, the more you can save on your premiums. Making your home more disaster-resistant might help you land cheaper premiums, too. See if buying your home and auto policies from the same insurer is cheaper than buying several policies from different companies. Seek out discounts; if you’re retired, some companies offer discounts for that. Stay with the same insurer — some companies offer discounts for being a long-term policyholder. Also, simply having good credit can help secure you the best available rates.

Why They’re So Expensive

“We’ve seen a constant uphill creep in the price of groceries,” says McBride. “Meat products and certain produce have been hit pretty hard.”

This can lead to some hard decisions in the grocery store — do you spend more money to buy those products that you want but that have increased, or do you look for substitutions? It might come down to deciding to substitute More Expensive Item “A” for Comparable, Yet Cheaper Item “B.”  “Households are having to make those types of decisions every time they go to the store,” says McBride.

How to Get Them for Less

Diligently track your grocery spending. Survey what you already have and make sure you’re using it. Look to your canned goods cabinet and see what’s been pushed to the back over the last few months. It may be time for a great big pot of veggie chili. Keep in mind that meal planning will go a long way. Create a list before you shop of only the stuff you really need, and stick to it. Keep a keen eye out for sales, and comparison shop. Since the start of the pandemic, there’s been a rise in digital coupons, says McBride, and a lot of supermarkets have customer rewards programs. Don’t wait until you need something to buy it; stock up on pantry staples whenever you see them on sale. (Because you know you’re going to use that garlic powder eventually!)

Why They’re So Expensive

“We’re not seeing a lot of discounting on clothes and shoes. Pricing is very strong. With supply issues, low inventories, and strong sales, there haven’t been a lot of markdowns,” explains Swartz. “If you’re trying to get a discount on Lululemon leggings, you’re probably going to be out of luck.” Due to the big casualization trend during the pandemic, activewear in particular is selling so strongly — thus it’s more expensive.

Though there are fewer discounts, a lot of retailers are growing their discount efforts, says Swartz. Think dedicated sale websites, and even special discount storefronts, like Macy’s Backstage or Nordstrom Rack.  Plus, off-price apparel stores — like TJMaxx — give shoppers the chance to buy branded items at deep discounts, explains Akbari.

Chains that are downsizing may also be doing store-closing sales, so keep an eye out for those. You can still find clearance sales on the internet, too; of course, not as many as you could in a weaker economy — but they’re still out there. And during every seasonal transition, there will be seasonal clearance sales, so instead of buying as soon as something new comes out, try looking to buy out of season, or secure items from a previous season that have already been marked down.

The skyrocketing demand for fuel, and the increase in crude oil prices have hiked the cost of gas.

Drive smarter and drive less. Fill up earlier in the week, when gas tends to be cheaper. (Strange but true — there’s a chance you’ll pay a few pennies less on a Monday than a Friday.) Unless your car’s manufacturer requires premium fuel, use regular-grade gasoline. Join a fuel rewards program at the gas station you frequent most regularly, and you can earn discounts or a free gallon or two over the course of several months. If you have a rewards credit card that offers cash back or special benefits for fuel purchases, make sure you’re using that specific card at the pump. There are also gas price apps that can help you find the cheapest fuel in your area, and the tried and true method of sharing rides.