Women Working From Home: The Stumbling Blocks You May Face, And How To Get Around Them 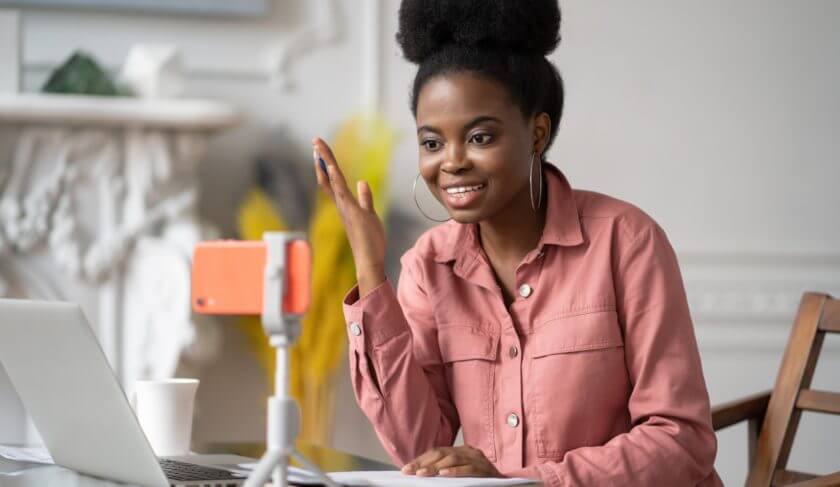 Women say they want to work from home around 50% more often than men do… But could it be holding us back from potential career advancements?

First, there was the Pandemic-Induced Office-Exodus. Then, there was The Great (Involuntary) Experiment: Transitioning To Remote Work En Masse Because We Had To.

Now, here we are, with many of us back to working in-office, and some of us… not. Some of us have discovered that remote work works. In fact, it might even work better for us than the in-person model ever did. Who is having this career-bending realization? Largely, women.

Stat: Women say they want to work from home full time around 50% more often than men do.

Another stat: Remote workers are 13% more productive, but half as likely to get promoted (Stanford).

Take these two stats in conjunction: if women are the ones working from home more—but doing so puts them at a disadvantage (diminishes their earning potential, their visibility to leadership, etc.)—that’s an equity problem.

In a hybrid working environment where some work in-person, and others remotely—the onus must be on employers to ensure they’re extending equal opportunity to employees regardless of where they’re doing their work.

Unfortunately, a level playing field is not a given. (Actually, l’m pretty sure level playing fields don’t exist–in part due to implicit bias in the workplace.) So as an employee, before seeking to work from home permanently, what should you consider re: how the decision to do so could affect a) your career, and b) your finances?

If you want to work from home, what can you do to ensure the arrangement doesn’t cost you — on multiple levels?

When it comes to career advancement in a remote environment, the biggest concern is not having facetime, says Lindsay Orr, Director, Head of People at Metromile.

The concern is valid. “With a work from home set-up, your interactions with people are largely pre-scheduled. You’re focused on task after task, going from Zoom meeting to Zoom meeting, working in between. You lose those moments of ‘hallway’ time’ to engage with colleagues,” notes Kathy Gersch, Chief Commercial Officer at change management firm Kotter.

When you go into an office, human interaction is inevitable—and thus human connection is often inevitable, too. That implicit visibility and engagement is good not only for the soul, but for your ability to a) network and b) get recognized for your achievements.

But with remote work, even if you’re more productive, your colleagues can’t necessarily see that productivity. Thus, it doesn’t necessarily come into consideration when employers are thinking about promotions, explains Gersch. “As much as we would like to have promotions be completely fact-based, equitable and all grounded in data–that’s never the case. Relationships and perceptions all come into play: they’re happening whether we try to remove them from the process as much as possible or not.”

If you want to make the decision to work remotely—but career growth is important to you—you may have to be extra deliberate about putting yourself out there to get seen, says Gina Minick, VP of Product, Telematics at Metromile.

Making yourself visible might be more work, but it can be done. “I’ve never met anyone at my job face to face yet. But I have worked to build a lot of relationships from my living room,” shares Minick. How did she do it?

“Whenever there’s any reason to connect with a colleague — for example when someone is presenting — I always try to take those opportunities to reach out,” Minick explains. “It goes a long way.”

“When you’re looking for a job, it’s a two-way street,” Minick emphasizes. “You want to know any company you join is going to set you up to succeed.”

It’s one thing if everyone is remote, says Gersch. But at companies where some workers are fully in-person, and some are hybrid or remote working, it’s just a fact that the culture norm might be weighted in favor of in-person workers. “In those environments, it’s probably going to become more complicated for remote employees to feel included. If you’re not in the room, you may have less of a voice.”

“Not all companies are going to be the same. You have to understand where the company stands and what position you’d be putting yourself in,” advises Gersch. If the predominant company culture is in person, and you’re choosing to not be, understand that might have an impact on the speed of your advancement in the organization. But, Gersch points out, maybe that’s a sacrifice in line with your priorities.

Career advancement aside, there are reasons to work from home. You might reap economic advantages, for example by eliminating commuting and childcare costs.

“You can’t expect a company culture is going to change for you,” says Gersh. You either live in the culture or find a better fit. “Everyone has to make choices and trade-offs. There is no perfect.”