How I Traveled the World For 18 Months And Saved Money 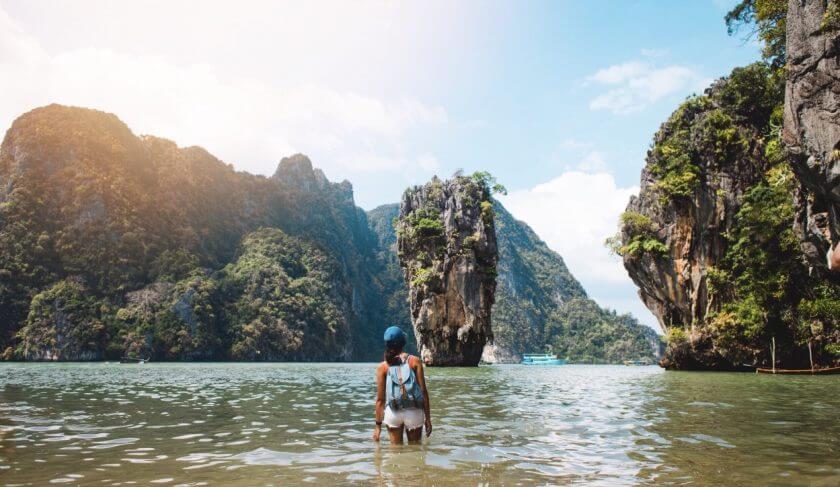 I was standing outside a hotel room in New Orleans when I received the call that would change the course of my life.

My friend and I had spent a fun- (and booze-) filled weekend in the French Quarter, and even though we didn’t go to bed until 2 a.m., I was wide-awake again at 8 a.m. in the hotel hallway, huddled over my cell phone, and found myself accepting an opportunity to travel the world for a year.

The only catch? I’d have to pack up my life in New York, quit my full-time job and set out into the vast unknown. At the time, I was gainfully employed at a trendy start-up, making just under six figures while also side hustling as a freelance writer. The mere thought of being my one-and-only provider was enough to send me into an anxious whirlwind.

More than two years after that chat — and 26 countries, six continents and a few lifetimes of memories later — I smile at my hesitation. My decision to travel (via a program called Remote Year, which organizes group travel for location-dependent professionals) was one of the best choices I’ve ever made. Not only did I gain wonderful experiences, I found I could make even more money as a full-time freelancer, and not having to pay for rent or car insurance back home also allowed me to save more money than I would have thought possible.

You may be familiar with the term “digital nomad,” which is a popular way to describe people who work remotely and travel. It sounds almost too good to be true — you can stroll the spice markets in Thailand, view graffiti in Colombia, and gaze at ocean views that go on for days in Portugal, all while making money. But what many Americans don’t consider is that the cost of living in these countries is substantially less expensive than it is in the United States. Nice meals in Southeast Asia cost around $3, and a month’s rent in Bogota weighs in at just $200, for a nice place. For me, that was one of the most surprising things I learned while country-hopping for 18 months. Here’s a look at some of the other big lessons I gained.

Though there are certainly less expensive ways to become a digital nomad, the Remote Year program charged me $2,000 per month (rates are now $2,500) for a private room within an apartment, all utilities, access to a co-working space, three activities per country (cooking classes, hikes, tours, etc.), and my travel between countries. This means once I booked that first one-way ticket to Croatia, where we started, the rest of our flights, trains or buses were included as we transitioned to new countries — or continents. While living in Manhattan, my rent was right around the same price, but didn’t include anything additional.

“Living in an expensive city or neighborhood will strain your budget considerably and prevent you from saving for the future. The general rule is that you shouldn’t spend more of 30% of your monthly income on housing,” explains David Reiling, CEO of Sunrise Banks. You also have to consider how much you pay in tax when you live in expensive parts of the country. One of the things that surprised me about living abroad was learning that I was eligible for the Foreign Earned Income Tax Inclusion. Though it’s important to hire a trusted accountant to ensure you’re following the right protocol, if you spend between 330 and 365 days out of the country (as proved via your passport and travel records), you aren’t taxed on your first $100,000 of income. After that amount, you pay a freelancer tax that varies depending on your income level.

Reiling says it’s always important to try to balance convenience of living with the cost of living, no matter where you reside. Not everyone wants to go on a worldwide adventure, but we can still look to save annually by living in an area with lower taxes. For example, many people who work in NYC commute from across the Hudson River in New Jersey. They’re just minutes from the heart of the action, but they’re saving big on things like property taxes and state taxes.

The people I traveled with during my months abroad worked as graphic designers, accountants, Web developers, and writers, and while we were exploring together, we were also networking, even if we didn’t realize it. The connections you make — even when people are in a differing field — can potentially lead to a higher-paying job overseas or in your home country. Everyone has different experiences, but considering I was a writer who dreamt of becoming a travel journalist, Remote Year set me up for success in more ways than I could ever predicted. It give me access to — quite literally! — the world, allowing me to pitch far and wide to publications I never dreamt of. And, it built my confidence within my own ability to start a content consultancy from the ground up. Fast forward to now, when I still travel for at least a week every month or so, and I’ve found I can find my focus no matter where I am: 30,000 feet up in the sky — or on a European time zone, working before my clients ever wake up.

In the end, I made tens of thousands more than I did while living stateside working full-time for an employer. This is partly due to that tax exception for nomads, but also because I finally had time to dedicate 100% of my energy toward building my business. And since I wasn’t paying for those expensive dinners in New York City, or other Big Apple costs, I ended up saving double the amount year over year. While the riches have been — and continue — to be fruitful, what I value the most from the experience isn’t found in my bank account. But rather, in my appreciation for all of the magic around me. And the permission it gave me to create a career with a work and life balance on my own terms.

SUBSCRIBE: If you’re not subscribed to the podcast, you’re missing out on juicy tidbits from some of the most accomplished women in the world!

This Week In Your Wallet: Burning A Hole In Your Pocket