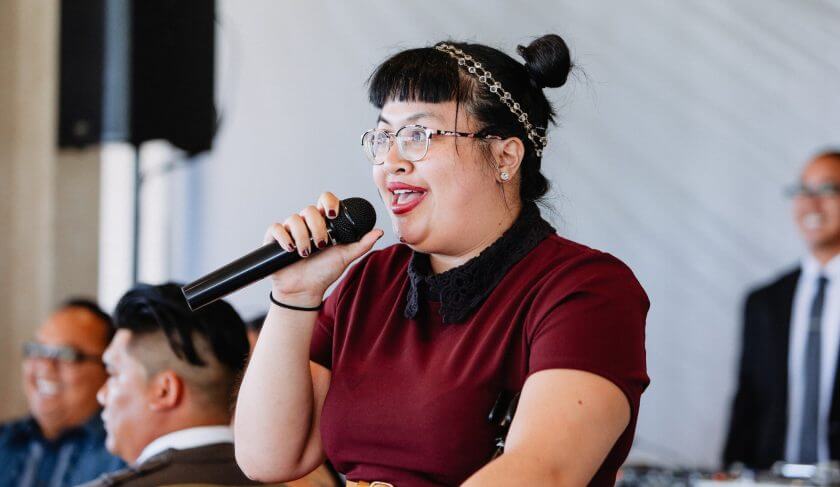 Have you ever had the experience of having your ideas dismissed, only to have them praised after your male counterpart repeats them? What about being interrupted by a male colleague while you’re speaking during a meeting? What about perception worries — that a colleague will see you as either overly emotional, or too cold? If you answered “yes” to any of these, it should come as no surprise that working in a male-dominated workplace is often seen as the ultimate balancing act of being assertive yet likable.

“There is not a woman in any industry or profession, who is not acutely sensitive to her environment,” says Audrey Nelson, a corporate communications expert. When you’re the only woman in the room, it may feel like a bad thing (perhaps in part due to years of conditioning) but standing alone in a sea of men can actually be an incredible asset — if you know how to make the situation work for you. In other words, Nelson says, women just need the proper tools to claim a seat at the table, and use our gender like the strength that it is.

First and foremost, be yourself.

You may occasionally feel like the only way to beat them is to join them (or behave like them, which may be worse), but then you’d be missing out on everything that makes women so amazing in the workplace. For example, women are known for being more articulate speakers, and having a higher degree of emotional intelligence, Nelson says. It’s that emotional intelligence that allows us to get an accurate read on people and situations via nonverbal communication and cues.

“Women tend to be empathic listeners,” Nelson says. “We put so much emphasis on talk —  but who’s the person sitting back and listening?” Of course in conjunction with your amazing listening skills, you should also adopt an assertive attitude, and try to communicate your thoughts in an authoritative manner (more on that in a moment).  But don’t let pressure to behave like “one of the guys” rob you of being your full self says Allison Cheston, a career advisor based in New York. When you don’t bring your full self to work or the things that make you unique, you miss the opportunity to use what makes you special and what could be your secret weapon, Cheston says.

Never be afraid to speak up, and speak boldly.

That whole thing about being interrupted at work — it really does happen more often to women, according to Nelson’s research, which also shows that in meetings, men speak for longer periods of time than women. Here’s how to shut that move down: If someone cuts you off, make sure you try to gain the floor back again quickly, and then reintroduce your idea and complete your comment. This will let you establish your presence and the importance of your ideas in a clear but subtle way, Nelson says.

If someone should bring up the same point that you did earlier as if it’s a new idea, acknowledge that it was your suggestion. You can do this politely by thanking your colleague for circling back to you, Nelson says. This allows you to be respectful and vocal at the same time.  It’s assertive rather than aggressive — and the two are very different things.

When it comes to other instances of mansplaining or of men simply being tone deaf to how the women (or woman) in the room, think about the battles that you’d like to fight — what usually channels your inner Rosie the Riveter? For the items that you feel warrant a response, don’t be afraid to pull someone aside and let them know how you feel.  If that doesn’t work, or you’d prefer an intermediary, you can go directly to human resources (or, in a small company, a manager or supervisor) and let them know that a line has been crossed.

If you’re the only woman in an office, you may feel more like a quota fulfillment than a qualified employee, and this can take a toll on your self-esteem. “Sometimes women think, maybe I really don’t belong here,” Nelson says. Speaking up and getting positive reactions can help turn the tables on that.

Ironically, it’s in meetings — where you may have previously been made to feel uncomfortable — where you can start to minimize self-doubt. Sharing your ideas in public, and practicing speaking with an authoritative tone can help you to grow more confident in your suggestions and presentation abilities, Nelson explains. Bringing notes and putting in a little extra time researching a topic before a meeting can also be helpful. If you really want a second opinion, practice pitching it aloud to someone you trust at work or a friend — sometimes all we need is a little reassurance.

Lastly, talking to other women — especially those who may have been in your shoes previously — can help validate your own experiences and feelings. Knowing that you’re not alone in your frustrations can make you feel less stressed. Remember that wanting to be comfortable in your workspace is not a feminine desire — it’s a human one.

Work Wives: The Perfect Marriage Of Personal And Professional