HerMoney Water Cooler: Should You Disclose Your Salary To Your Friends? 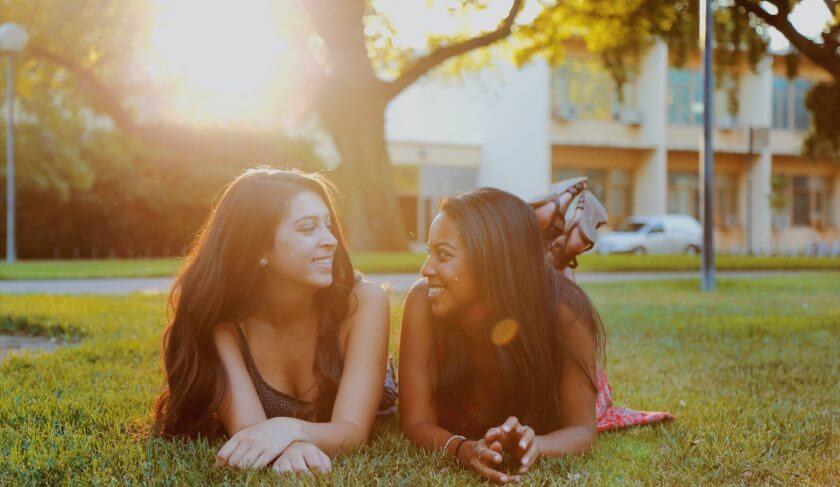 A recent post in the New York Times had us buzzing in the HerMoney office, so we decided to ask our private HerMoney Facebook group, “Do you talk about salary with your friends?” Perhaps not surprisingly, the group was divided, and we loved the advice they gave when it comes to discussing company dollars with your friends.

As a teen, most Friday and Saturday nights found me babysitting the neighborhood kids to earn spending money. And, while most of the families I worked for were generous with their hourly wages, one family who hired me regularly paid practically nothing per hour … But, because I liked their kids and I always needed money for the movies (and makeup to fill my Caboodle), I usually said yes.

One Saturday evening, after spending four hours with rowdier-than-usual kids, the parents came home and handed me a $10 bill. Because I was young and hadn’t yet learned to speak up when underpaid, I grudgingly accepted the payment. I was sure I deserved more compensation but didn’t know how to prove it until I talked with my best friend on Monday morning. She, too, babysat for the same family and, when I told her how much they’d paid me, she was incredulous: My friend was regularly paid almost triple what I had received in payment.

Needless to say, I never babysat for that family again.

Since that experience, I have always compared notes with my friends when it comes to making money. As a new nurse right out of nursing school, I asked my classmates about the hourly rates they accepted at other hospitals. When it was time to negotiate my first raise, I discreetly asked my more seasoned coworkers for advice on what to realistically expect as I climbed the ladder.

And, these days, when a friend asks me how much I’ve been paid by a website for a freelancing gig or my hourly rate for social media managing, I give her an honest answer because, frankly, it benefits both of us in the end. My friend will go into a salary negotiation feeling confident and I know that when the time comes, she’ll be honest with me if I need to ask for a raise. It’s always a win-win when women talk about money.

A recent article in the New York Times: “I’ll Share My Salary Information if You Share Yours” had us buzzing around the HerMoney water cooler, and we were curious what the members of our private HerMoney Facebook group would have to say. Read on to see their insight on whether you should disclose salary information to friends and coworkers.

Group members who support talking turkey when it comes to our pay immediately jumped into the conversation to say that talking about salary with our girlfriends is a must and, in some cases, an inevitability. Several commenters pointed out that positions in government and in education have pay scales that are made publicly available. And, a few even pointed out that our friends are the ones who will be the most supportive when we achieve financial success.

Relationship expert Dr. Melanie Ross Mills recently told HerMoney, ““We need people in our lives who will jump for joy with us when we get a raise,” Mills said. “We need those who will help us figure out a plan to get out of debt.  And we need the wise, safe and neutral friends who won’t hold our paychecks against us, whether we make more or less than them.”

And the group wholeheartedly agreed with Dr. Mills:

AJ F. commented:  “I find it incredibly empowering to hear a colleague is making more than me. More pie for you means there’s more pie out there for me, too.”

Kelsey L. wrote: “I have only recently begun discussing salary ranges (not asking people for specifics, but playing the over/under game). Unfortunately this led to me finding out that I am the lowest paid in my position, but I am happy with the job and paid more than I ever expected at this point in my career, so I am not pushing too hard for a raise.”

Kara S. armed herself with knowledge from both sides of the gender gap when it came time to ask for a raise:  “I asked co-workers (both men and women) what they thought I should be making and used the composite number to negotiate a raise. It was eye opening,” she wrote.

Citing differences in education, ability, and experience, several commenters pointed out that not all salaries are created equal, and divulging your pay to friends can backfire. Commenters in the thread said that talking about money with friends can be uncomfortable  at first, and learning that you are underpaid compared to a coworker can be a blow to your professional ego.

Lori M. said:  “I work for a smaller company and we do not discuss salary/hourly rates and I am fine with that. I believe the onus is on us as empowered adults to research whether we are in the ballpark of where we should be or not — but it appears based on the comments above I am in the minority. People and their personalities and skills are not equal nor is our pay, and I am ok with that. Is there some gender disparity, probably. But if I am good enough and work to show MY value I think it will come out in the wash. I have nothing to hide, but I also do not owe it to anyone to share my personal information or finances.”

Rebecca G. agreed. She commented: “In my large, private company, I don’t. My concern is that I have pretty aggressively negotiated and have requested raises so my concern is that I’m making more than most. I don’t want them to judge me. I know that I’m at the top of our pay range. Most recent raise that I requested took me to the top of the range.”

Jill H. said that while she doesn’t talk salary at work, she’s making an effort to talk to her friends more openly about money. “I work for a large corporation, and we generally do not discuss salary (we use pay scale bands, but those are rarely discussed either). I do try to make a point to discuss salary and finances more openly with my friends and family to lessen the stigma and share insights,” she wrote.

Team ‘Maybe, But Only With Trusted Friends’:

Of course, with every debate, there’s often the middle ground and that was no exception in this discussion. Several commenters admitted that, while they do talk to their friends about money, they proceed with caution.

Sarah M. says that she relies on her work bestie when it comes to asking her financial moves within her company. “I don’t talk to everyone about it, but my best friend at work and I recently disclosed it and we make the same,” she wrote.

Others commented that they will divulge information on career forums and job sites, but that discussing with friends is still a no-go. “I absolutely do not discuss my compensation with anyone but Glassdoor,” says Tiffany G.

Ultimately, for some HerMoney group members, the decision to talk about money comes down to one factor: trust. Several said that they were hesitant to discuss salaries with coworkers because they weren’t sure their conversations would stay confidential. “For me, I would have to be very close with the co-worker so that I knew the information would be used appropriately and professionally. Trust is key,” wrote Kelly A.

While the HerMoney group was divided pretty evenly on this topic, one theme was clear: women talking about money in a non-judgmental way and environment is always acceptable. And, as Angela Henderson writes in a recent HerMoney post, “Knowledge is power. And the most powerful, successful women among us are already discussing their money situation with their pals.”

If you don’t feel comfortable talking to your coworkers about your salary, there’s always space around our HerMoney water cooler. Join us in the group for more discussions just like this one!

HerMoney Podcast Episode 201: Girls Who Invest And How To Get More Women Managing Money Than Ever Before