How Executives Hold Black Women Back at Work 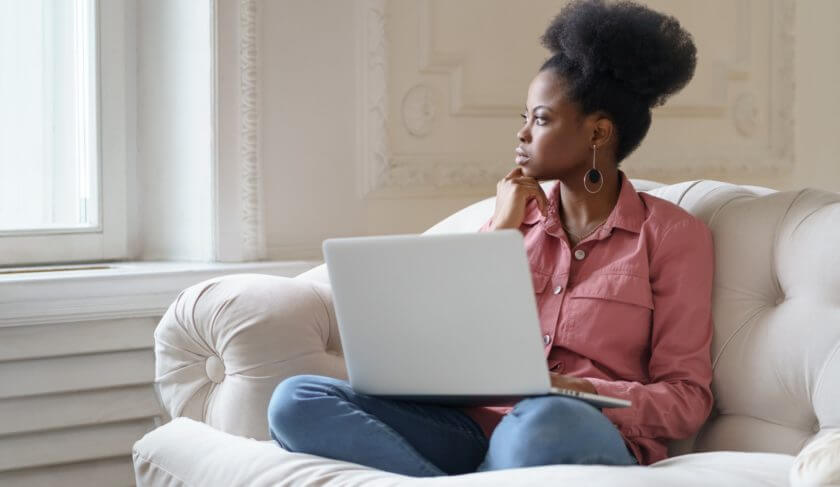 Despite being highly educated, women of color make up just four percent of C-suite executives. Here’s what companies can do to change that.

A recent study from McKinsey and LeanIn.org found that while women overall have more high-ranking roles than in previous years, women of color make up just 4% of C-suite executives. And that percentage hasn’t changed for several years.

“When you look at how many women of color actually make it to senior level or executive-level positions, it’s insane how small a fraction that is when you compare it to the number of women of color in jobs across corporate America in general,” says Mandi Woodruff-Santos, a personal finance expert and co-founder of the popular podcast Brown Ambition. “It’s really disheartening to see how few of us actually make it to the top levels.”

Black women are often touted as one of the most educated groups in the country, but their paychecks don’t show it, making 63 cents for every dollar earned by white men.

Zeanique L. Barber, a technologist and educator with extensive experience in human resources, has been investigating these disparities for years.

“When I started my career, I kept looking for women that looked like me in different positions and I never found them and I couldn’t understand it,” Barber says. “Having worked in human recourses and learning about why people come to jobs and why they leave jobs and why they stay — it opened my eyes to wanting to understand the data.”

And this data revealed a myriad of ways Black women are held back in corporate America.

YOU CAN’T BE WHAT YOU CAN’T SEE

Marian Wright Edelman once said, “You can’t be what you can’t see.”

When Black women in corporate America don’t see other Black women in high-ranking roles, they could get discouraged about their own future at the company.

Furthermore, just as you might call on friends and family to help you navigate life in a new city or neighborhood, having help navigating a new company can be the key to success in that organization.

“When you go as a Black woman to different organizations you don’t find Black women in leadership, so one of the things that hold us back is the lack of representation in leadership positions and mentorship,” Barber says.

A lack of representation can even damage a woman’s confidence. “Even if you were hired based on your skills and nothing else, when you’re the only one in the room who looks like you or one of few, it does feel as if you are potentially just filling a quota,” Woodruff-Santos says. “And those doubts can be amplified when you have to experience microagressions.”

Woodruff-Santos, who does career coaching as well, says some of the Black women she’s worked with not only feel as if they’ve been unfairly passed over for promotions, but also that their voice and concerns aren’t heard. Furthermore, they often feel they are judged more harshly than their counterparts.

Barber has found in her research that Black women are often criticized based on subjective rather than objective measures. For example, leaders might incorrectly assume that a woman who doesn’t speak over others in meetings doesn’t have anything to contribute. Or executives might question women about how they completed a task or how their execution made others feel, Barber says, instead of focusing on results.

And many Black women are leaving corporate America because they’re overworked. In fact, a recent survey by Fairygodboss, the largest career company for women, and nFormation, a community for and by professional women of color, found that 1 in 3 of all women of color plan to quit their jobs by next year, citing burnout as their reason for leaving.

HOW COMPANIES CAN SHOW THEY CARE ABOUT BLACK WOMEN

There are many practices organizations can implement to better support Black women and all employees of color.

Promote mentorship. “Put in place mentorship and training programs for BIPOC talent to be sure we feel supported,” Woodruff-Santos says.

Examine your hiring practices. Have a hiring process in place that promotes diversity. “Have a system for where you’re publishing new roles to be sure they’re publishing them in places where very diverse audiences can see them,” Woodruff-Santos says. And enlist a panel of managers – instead of one individual — to review the applications.

“The reason processes are important is because you build into the process steps to ensure that you are casting a wide net and looking at things from an inclusive point of view and that you are limiting the opportunities for people’s unconscious bias to create situations where you have a lack of diversity,” Woodruff-Santos says. It’s time to examine your system for promoting internally as well.

Assess and address your company culture. Tracking retention rates for your BIPOC employees can help. “That can tell you a lot about company culture and if it is hostile or welcoming to BIPOC talent,” Woodruff-Santos says.

This also includes creating an environment in which women of color feel comfortable reporting mistreatment in the workplace, Barber says.

“It’s one thing to show up and advocate for someone on their behalf in a meeting but it’s another thing to address the systemic oppression that exists in the core fabric of the organization,” Barber says. “In order to be an effective ally, you also have to talk about those systemic things that are built into how organizations are run. And chief among those is for people who have been treated poorly to have an avenue to be able to report that behavior and not have to be retaliated against once they are reporting it and also not victimizing the victim all over again.” Additionally, Barber stresses the importance of having evaluation systems that are based on data, not subjective measures.

Pay attention to pay disparities. “Be willing to look at the numbers and how you’re paying people by gender, race, location, and title,” Woodruff-Santos says. “See where you’re falling short and have a compensation team that is empowered to close those gaps when they find them.”

HOW BLACK WOMEN CAN GET AHEAD

Though it’s not Black women’s responsibility to dismantle systemic racism, there are ways to move ahead in spite of it.

Get it in writing. Barber recommends asking about promotion criteria early on in your tenure with a company or even during your interview and documenting that information.

“Have them put that in writing,” Barber says. “That way the needle doesn’t keep moving.”

Find a mentor. Seek out Black women in positions of leadership at your organization. If you can’t find any, turn to social media. Hashtags, Facebook groups, and LinkedIn can be helpful. Try looking for Black women executives who went to your college or who are from your hometown, Barber says.

Set boundaries and ask for help. If you’re being overworked, speak up. “When you’re getting overworked you can often feel like it’s all happening outside of your control, but the reality is as women we often give signals to our colleagues that we are willing to take on extra work because we’re socialized to lend a helping hand and to offer assistance to others without asking for anything in return,” Woodruff-Santos says.

This can be especially true for women of color who are afraid of being penalized for saying no.

Also, be willing to ask for the time and resources you need to get the job done. Know that asking for help doesn’t make you less capable. “The most capable people are the ones who can articulate what they need to achieve a goal,” Woodruff-Santos says.

Know when it’s time to go. “When you’ve done everything right, when you’ve done good work, when you’ve told your boss what you want out of your career, and you still don’t feel like you’re moving anywhere, then I think it’s time for you to go,” Woodruff-Santos says. “It’s time to look for a new opportunity elsewhere and to recognize that just because you have a decent job now it doesn’t mean you couldn’t find another one that’s also decent and has better career prospects.”